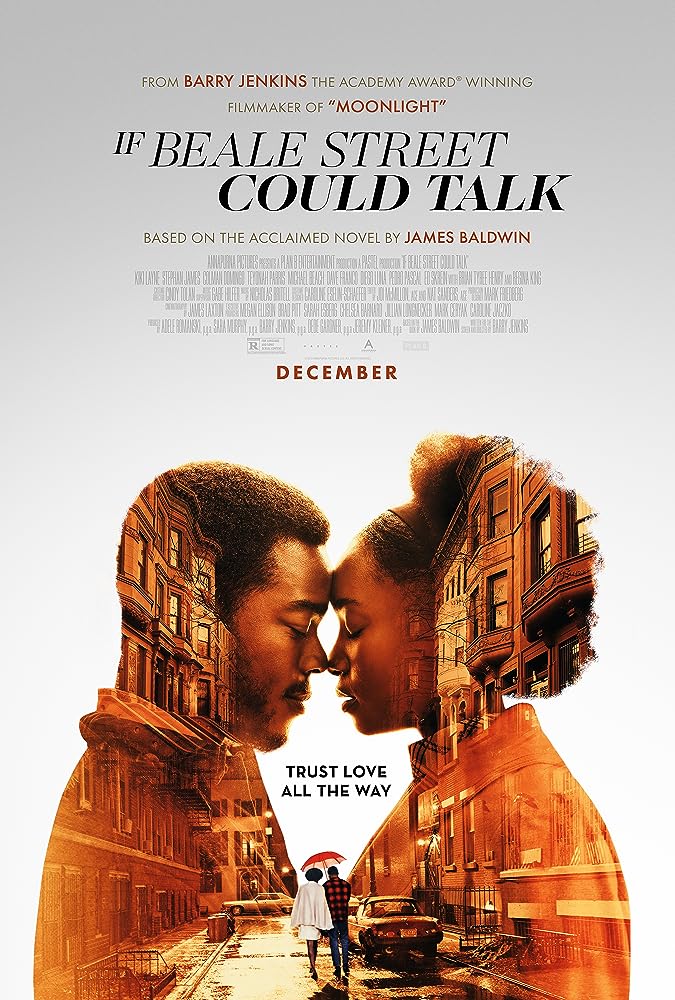 Based on the novel of the same name, this James Baldwin adaptation directed by film genius Barry Jenkins focuses on a young African American woman (Tish) in Harlem who is pregnant with her first child, while the father (Fonny) is imprisoned for a crime he didn’t commit. She and her supporting family scramble to prove his innocence before the baby is born. The film is a celebration of the importance of love and family, but also shows the dark side of humanity through its portrayals of racism and hatred.

Barry Jenkins is a fairly new filmmaker, but a talented one. He wrote and directed 2016’s Best Picture winner “Moonlight”, a story about a gay African American in Miami Florida, and his journey through self-discovery. Now, with “If Beale Street Could Talk”, he ups the game on emotion and powerhouse performances.

Jenkins has a distinct visual style to his films. He loves to use close up shots of a character looking directly into the camera, as if subtly communicating their emotions with the audience. His films are also very color-driven. Moonlight has tons of purple and blue shots, while “If Beale Street Could Talk” is riddled with shades of yellow and brown. His films are beautifully to look at, especially his latest feature.

Tish is played superbly by Kiki Layne, a promising newcomer to the industry. With her performance alongside Stephan James (Homecoming) as Fonny, this on screen couple is one of the most chemistry-driven and realistic depictions of true love in years. “If Beale Street Could Talk” will surely set these two excellent performances on the map for greater gigs to come.

The powerhouse performance here though is Regina King as Tish’s mother Sharon. King gives the audience her raw emotion that seems to get more intense scene by scene. The exception though, might be in a moment towards the beginning where family dynamics clash in a heated and gut-punching argument that ends up being the scene that stays in the mind for hours after viewing.

From start to finish, watching “If Beale Street Could Talk” is more of an emotional experience than anything else. The love and romance is so real, the cinematography brings the story to life, and the music wins you over, making the film one of the most beautiful romance films in recent years. 2018 was a pretty good year for romance with Bradley Cooper’s “A Star is Born” making noise with mainstream audiences and “If Beale Street Could Talk” quietly coming through under the radar. As outstanding as both of these films are, it’s “Beale Street” that takes the cake in terms of bringing fictionalized love to life.